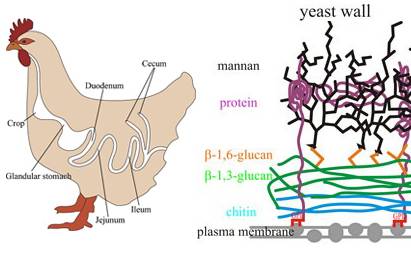 In a context moving towards antibiotic-free livestock production, research in feed additives has largely increased to evaluate different products and their effects on animal health and immune response, in addition to animal productivity [Xue  at al., 2017]. Among the different products, prebiotics such as yeast cell wall (YCW) extracts have been widely used; they comprise mannanoligosaccharides (MOS), mannan-proteins, β (1,3)- glucans, β (1,6)-glucans, chitin, and glycophospholipid surface proteins associated with the plasma membrane [Guang-Da et al., 2017].

The trial was performed at the poultry house of the Experimental Farm of the University of Padova (Legnaro, Padova, Italy). Chicks were individually weighed on their arrival, identified by a leg ring, and weighed for live weight once a week until slaughtering at 44 d. Pen feed consumption was measured daily during the trial.

For each treatment, three commercial diets in crumble form were administered during the trial as usual, i.e. from 1 to 14 d; from 15 to 28 d; and from 29 d until slaughtering (on d 44). All diets were formulated to satisfy broiler nutritional requirements.

3- Our study showed differences in the mucosal immune responses as the density of intraepithelial leukocytes (especially CD45+) was lower when chickens received a diet supplemented with yeast cell walls. A lower immune reaction in these birds could mean that YCW protected animals from any agent/cause that could have challenged animals during the trial, which is consistent with the increased number of goblet cells, and thus increased mucin production, in the gut of these animals.

5- The GSEA analysis demonstrates that immune, pro-inflammatory and pro-apoptotic processes are activated to a higher extent in chicks fed the control diet compared to those fed with the supplemented diet. The activation of these pathways might be a consequence of higher stress levels due to any challenging condition (e.g. nutritional challenge, pathogens infection, inflammatory processes) in control animals, and is in agreement with the higher density of intraepithelial leukocytes and the reduced amount of goblet cells observed in this experimental group.

based on the biological functions of the DEGs and the significantly enriched gene sets, we hypothesize that molecular pathways mostly impacted by YCW extract supplementation are those related to immunity. This suggests that yeast supplementation might play a key role in triggering anti-inflammatory mechanisms and an animal’s response to pathogens.

[1]-Baurhoo, B., Phillip, L. and Ruiz-Feria, C.A., 2007. Effects of purified lignin and mannan oligosaccharides on intestinal integrity and microbial populations in the ceca and litter of broiler chickens. Poultry science, 86(6), pp.1070-1078.